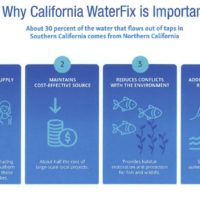 On July 5th, Randy Record, Chairman of the Board of the Metropolitan Water District of Southern California, sent a letter to County CEO, Mike Powers, alerting the County that the California WaterFix project will be ready for consideration soon by the MWD Board of Directors. The letter invites him to learn more about this upgrade to California’s water system.

The letter includes the following paragraph, “I believe the cost of inaction will have significant negative consequences for Southern California. The Delta’s declining ecosystem and miles of aging levees are increasingly vulnerable. Investing in a Delta solution will help maintain the reliability of our statewide water system. But we all need to understand this project and important financial details before making a firm investment decision. This will be one of the most important water decisions for The Metropolitan Water District of Southern California in a generation.”

On the California WaterFix website (https://www.californiawaterfix.com/ ) the problem is stated as: “California’s primary clean water supply that 25 million people depend on is out of date, unreliable and inefficient.”

The 4 major points are as follows:

VC CoLAB has been a supporter of Californians for Water Security for several years, a coalition of over 12,000 California citizens and more than 175 organizations that support California WaterFix.

In July of 2016, I testified to the State Water Resources Control Board at a hearing to consider the California WaterFix in Sacramento, supported by Calleguas Municipal Water District. My testimony included the following:

“Ventura County has been a leader in conservation and in the Groundwater Sustainability Plan process. And, we have some of the strictest growth control measures in the state. But the state water supply will be needed to replenish our groundwater basins, refilling aquifers to sustain our farmers and businesses that depend on well water. Imported water is needed for our cities, treated by our wastewater facilities, released to our creeks, and is truly a lynchpin that makes other water development efforts succeed, supporting our economy.”

The State Department of Water Resources (DWR) released a statement in December of 2016, announcing the release of the final environmental documents for California WaterFix, saying that it is the “preferred project to address environmental and water supply concerns…The product of 10 years of study, analysis, and public input, California WaterFix is a key element of the Brown Administration’s five-year plan to build more reliable, resilient water systems and to restore important ecosystems. Now that the EIR/EIS is completed, Biological Opinions are expected to be finalized in early 2017, clearing the way for final environmental clearances, completion of other necessary agreements, and construction beginning as soon as 2018.”

The biological opinions were issued on June 26, 2017 by Federal Agencies. In a press release, DWR stated, “These biological opinions allow WaterFix to continue moving toward construction as early as 2018. This important project is designed to ensure a reliable water source for 25 million Californians while affording environmental protections for multiple species that depend upon the Sacramento-San Joaquin Delta.”

VC CoLAB continues to support the California WaterFix and we are hopeful that MWD will vote in favor of this project, investing in this comprehensive solution for the water future of California, including Ventura County.