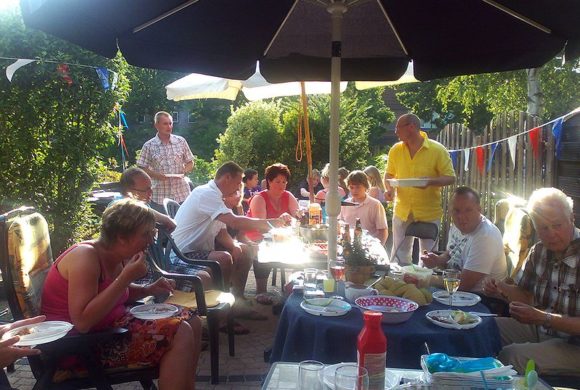 The County of Ventura has imposed a series of new restrictions on large outdoor gatherings on private property in the unincorporated areas of the county. The new rules place limits on the number of people a property owner can host, restricts the total number of events that can be held in any one year, and imposes various requirements on bathrooms and outdoor lighting. While pressure from CoLAB and our members vastly improved the final ordinance from the original version, more work needs to be done to protect the ability of landowners to enjoy the outdoor use of their property.

The newly adopted regulations, which were passed at the end of a marathon meeting of the Board of Supervisors on July 17, apply to events that take place primarily outdoors. The definition of outdoor events is extremely broad and covers any large gathering of people, from formal events like wedding receptions, to social events like birthday parties and bridal showers, and even First Amendment-protected activities like prayer meetings or political rallies.

The new regulations are revisions to an existing temporary outdoor event ordinance that was the subject of a successful lawsuit against the County of Ventura in 2018. In Epona, LLC, et al v. County of Ventura, the Ninth Circuit court ruled that the existing regulations allowed discrimination against protected religious expression and that they “failed to provide sufficient guidance to permitting officials”. This ruling led to revisions that were written by County Counsel in consultation with the Planning Division. On release of the draft revisions, CoLAB pointed out many flaws in the language, some that were addressed quickly by counsel.

Revisions to Planning Division regulations must go through a Planning Commission public hearing and then a final decision at the Board of Supervisors. The version originally presented to the Planning Commission would have imposed severe limitations on the ability of property owners to hold even moderately-sized outdoor gatherings on their own property. This proposal would have placed restrictions on events larger than 50 people, limiting the total number of such gatherings to 3 per year and capping the total number of people allowed to attend at 150 for parcels up to 5 acres and 250 for parcels larger than 5 acres. Any property that exceeded those limits would have to apply for a discretionary permit, an expensive and time-consuming process costing in the range of $50,000 to $100,000 for county fees and consultants.  And, there is no guarantee of success as a potential project must be presented to the Planning Commission and Board of Supervisors for approval.

The fact that the definition of “outdoor event” was so broad, and the attendance threshold so low, meant that even ordinary social events like birthdays, family reunions, Fourth of July barbeques or retirement parties would have run afoul of these regulations. In addition, by limiting the number of gatherings to three per year, it was almost inevitable that property owners would exceed that limit in any given year. This would have made violators out of ordinary property owners while allowing County Code Enforcement to demand expensive compliance fees.

The damage would not have been limited to the rights of property owners either. These limitations on the number of events and caps on maximum number of attendees would have negatively impacted the local tourism industry by discouraging travel into the county for family gatherings, weddings or other events. It would have also hit local hotels and restaurants, as fewer people from outside the county would be staying in hotels and eating out.

The caps on maximum numbers of attendees and events would also have hurt nonprofit organizations which rely on large fundraisers to bring in donations. These restrictions would have severely limited the ability of large property owners to donate their land for charitable causes.

The ordinance also proposed regulating outdoor lighting and noise at every event. It would have required all amplified sound to be shut off after 9 pm, even though existing county ordinances required shutoff after 10 pm. Temporary outdoor area lighting would have been required to be shielded and directed downward, even though event rental companies contacted by CoLAB indicated that they did not provide any products to meet those requirements.

Finally, the original ordinance had a notification provision that would have been unworkable and violated the privacy of property owners. The ordinance would have required property owners to notify the owner of every single property adjacent to their own in advance of the event. The notice would also have had to include their personal contact information including a phone number. This would have seriously compromised the privacy of property owners by forcing them to widely disseminate their personal information, simply for having a large gathering on their own property.

Furthermore, the event host would have had to respond to any “reasonable” complaint within 15 minutes and resolve the issue. There was no definition of “reasonable” in the ordinance and no guidance on how to resolve a complaint.

CoLAB testified and rallied local property and business owners to speak about the significant problems with the outdoor event ordinance. At the June 21 Planning Commission hearing, CoLAB argued for increasing the number of allowed events up to 10 per year, raising the minimum number of guests before regulations took effect and eliminating the notification requirements. While the Planning Commission didn’t adopt CoLAB’s recommendations in whole, they did expand the number of events from 3 to 5 per year and minimum threshold of guests from 50 to 75.

At the July 17 Board of Supervisors hearing, CoLAB and our members tackled the issue of the notification requirements as well as the limits on events held on larger properties. CoLAB argued that bigger properties, those 40 acres or larger, should be able to hold more events with more attendees, both to allow property owners to fully enjoy the use of their land as well as to allow more opportunities for non-profits to host fundraisers in the scenic unincorporated areas of the county.

In the end, the Board adopted a final ordinance that incorporated many of CoLAB’s suggested changes, including:
• Increase in the number of events allowed per year per parcel from 3 to 5 for properties less than 250 contiguous acres.
• Increase in the number of attendees allowed before regulations take effect from 50 to 75. There is no minimum number of outdoor events imposed with 75 or less attendees.
• A new category of properties with 250 contiguous acres under common ownership was created that allows 10 events per year per parcel, increasing the minimum guest count to 100 before regulations are imposed and adding a larger maximum guest count of 350.
• Limiting regulations to stationary events only, allowing tours and nature hikes to be exempt from the ordinance.
• Clarification in the definition of outdoor events as to not include parties that are indoor/outdoor events.
• Removal of a burdensome mandate that property owners notify and provide personal contact information to all adjacent neighbors and respond to all complaints within 15 minutes.

We do not believe this will be the last time this ordinance will be discussed at the Board of Supervisors. The limits set on the size and number of events were arbitrary, not based on research of the existing events in the County. The ordinance will need future adjustment to take into account large properties between 40 and 250 acres in remote locations that have numerous fundraisers in support of the over one-thousand non-profit organizations in our County.

While the final ordinance did not include every change we advocated for, it is nevertheless a significant improvement from the original version. We want to thank all of our members and supporters who attended and testified at these two lengthy public hearings.  Your help is critical to our success.

In particular, we appreciate the heroic efforts of Esper Petersen who clearly articulated the negative consequences to charitable organizations throughout the county from this ordinance, using his own situation as an example. Mr. Petersen is a supporter of many worthy charities, and his testimony was invaluable to the improvement of this ordinance at the Board of Supervisors. We also thank Bud and Kim Sloan, Tina Rasnow and Alda Perry for their well thought out testimony to the Supervisors.

This ordinance is an example of the ability of CoLAB and our members to work together to significantly improve harmful regulations. Without member donations and their engagement in the process, CoLAB would not have the resources to be the successful government watchdog that we have become.