The County of Ventura offered further clues to what landowners, farmers and ranchers can expect from the proposed Wildlife Corridor regulations during a second stakeholder meeting held on August 8. New restrictions on fencing, lighting and brush clearance were suggested, potentially creating new hurdles for landowners and increasing the threat of wildfires by restricting brush management within the corridors.

In January 2017, in a 3-2 vote, the Board of Supervisors advised the Planning Division to study potential new regulations within mapped corridors, covering 164,000 acres that cut through the heart of Ventura County. The justification made by the Board majority was based partially on a map (see below) prepared by the Planning Division showing a number of small, approved ministerial projects that are allowed activities under current regulations. This map lumps together example projects with varying purposes, without a context for how they would prevent wildlife passage. 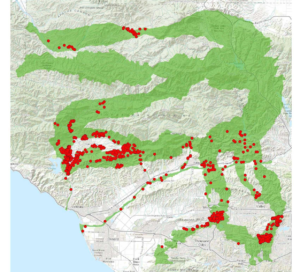 For instance, the map uses red dots within the green wildlife corridors to show accessory structures under 2,000 sq. ft. (which are unlikely to prevent wildlife migration), fences/walls over 6 feet high (with no indication of their length) and greenhouses up to 20,000 sq. ft. (without showing actual sizes built).

In mapping projects, scale matters, and the above map does not show the true spacing of the projects with respect to lot sizes. County regulations already limit the construction of buildings to 5% of the total lot size meaning that only 2 acres of a 40 acre lot could contain structures. With this requirement, most projects would leave ample room for wildlife passage. CoLAB requested that the three example project types be separately mapped and that each type be further analyzed to determine whether the insinuated problem warrants further regulation.

To prepare our stakeholder input for the August 8 meeting, CoLAB constructed a series of land use maps showing the corridor areas using layers directly from the County of Ventura GIS database. We shared these maps in an additional meeting with the local branch of The Nature Conservancy (TNC) and their partners, asking questions to educate ourselves while seeking to find common ground and develop ideas for sensible regulations.

CoLAB also participated in a joint stakeholder meeting with Supervisor Peter Foy, sharing our land use maps with constituents in the Fourth District who will be directly affected by any new regulations, gaining valuable feedback. Supervisor Kelly Long is also organizing a similar stakeholder meeting to notify constituents who will be impacted in the Third District. CoLAB would welcome any Board of Supervisor to contact us, as we can assist with similar presentations.

At the August 8 meeting, the County Planning Division proactively engaged local stakeholders with expert knowledge of environmental issues, agriculture, livestock grazing, and other businesses that operate in the unincorporated areas. Stakeholders and County Planning Staff had a productive discussion about the challenges inherent in creating reasonable and enforceable regulations.

Fencing – Stakeholders emphasized the need for fencing standards that take into account the diversity of activity in the unincorporated area. There is no simple one size fits all solution. Most of the areas within the corridors are either farmland, support grazing or small livestock, or have houses or small businesses, all of which have different needs for fencing. Standards for fencing must take into account all activities in the wildlife corridors along with the demands on County staff to monitor compliance.

In addition, there must be a balance between the need for containment and protection of livestock and the ability for wildlife to migrate through the county. Long time ranchers have not seen wildlife get caught in barbed wire fences in Ventura County as is seen in other states. They have photo and video evidence of many species of wildlife living on and migrating through their lands.

Lighting – Like fencing, stakeholders pointed out the many different lighting types that are required for a wide range of activities, such as animal breeding, security lighting for equipment and stockyards, temporary filming and other business needs. In most ranching activities, lighting has not been seen as a significant deterrent for animal migration.

Invasive Plants – The discussion centered on restrictions on planting invasive plants and defining which list to adopt into policy.

Noise – Stakeholders had concern about limitations on nighttime operations for oil, filming and agricultural operations.

Brush Clearance – County staff originally focused their proposal for limiting brush clearance within 200-300 feet of ridgelines and watercourses. However, a representative of the U.S. Fish and Wildlife Service suggested consideration of expanding restrictions throughout the corridor.

CoLAB and members of the ranching community pointed out that limitations on brush clearance would not only significantly burden agriculture and businesses in the unincorporated area, but that it would dangerously increase the wildfire risk by preventing ranchers from managing the amount of dry brush on their land.

Cattle ranchers clear a percentage of brush and allow native grasses to grow, supporting cattle and many other species of wildlife. Ranchers also provide water sources that are used by both livestock and wildlife. These practices play a huge role in mitigating the fire risk all across Ventura County. The stakeholders suggested the County seek out the input of County Fire before making rules on brush clearance.

Subsequently CoLAB prepared the map below to show fire hazard areas from the County of Ventura database (see below). 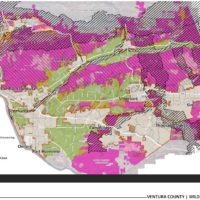 The pink areas of the map are very high and high fire hazard zones. They directly correspond to grazing lands (light hatch) shown from the State Important Farmland mapping program. The Grazing / Fire Hazard areas in the wildlife corridors (cross hatch) surround the cities of Ojai and Fillmore and the Community of Piru. The fire hazard areas are also directly adjacent to areas in the cities of Camarillo, Moorpark, Simi Valley and Thousand Oaks.

Former Ventura County Fire Chief, Bob Roper, in an opinion letter to the VC Star (Ranching at Risk, 8-28-17), wrote: “I am concerned by a movement to enhance wildlife migration paths on hundreds of thousands of acres of land next to city populations across Ventura County. The proposed enhancements suggest actions on how large acres of rural Ventura County should be managed â€” actions that may have an adverse effect on the local cattle industry and increase the severity of wildland fires.” Mr. Roper was fire chief for 15 years and is calling to “exercise caution and work with all stakeholders to enhance wildlife migration paths while not sacrificing a viable economic industry and wildland fire safety.”

Chokepoints – County staff defined chokepoints as any place where wildlife passage narrows. CoLAB commented that this definition is “unacceptably vague” requiring discretion and is not an acceptable standard. The lack of clarity in this definition would result in all projects becoming discretionary. Kristeen Penrod, representative of South Coast Wildlands, reminded the group that the noted objective was to maintain, not create, connectivity. A suggestion was made by Jamie King (State Parks) that a percent coverage of structures and fuel modification be considered. Colab responded that a 5% lot coverage limit already exists for buildings in Open Space and Agricultural designated lands.

It is evident that there needs to be much more conversation and stakeholder input before restrictions in the wildlife corridors can be constructed. An issue that has not been discussed is the lack of a realistic plan for wildlife passage across the most significant barriers in the county: highways. Highways 101, 23, 33, 126 and 118 all run across the Wildlife Corridors, creating significant barriers to wildlife passage. Without addressing how the County plans to get wildlife across these barriers, the new regulations will simply punish landowners without aiding the overall goal of wildlife migration.

We appreciate that County Planning staff are open to a better understanding of the realities of farming and ranching. Since the stakeholder meeting, staff has toured an active ranch in Piru to view existing agricultural practices including horse and livestock fencing, crop production, filming and general operations.

Given the number of outstanding issues in the proposed regulations, the County’s timeline of finishing the process by the end of the year is not advisable. CoLAB recommends that the County abandon their timeline and continue to hold meetings with available experts to ensure that proposed regulations reflect the unique diversity of Ventura County and how it utilizes its agricultural and open space lands. A slower, more consensus-driven process will ultimately result in more reasonable and sustainable regulations that account for the needs of the county and for public safety.

CoLAB will continue to work with the County to achieve the goal of wildlife connectivity while ensuring that we are not sacrificing the viability of valuable ranching, farming and business operations in the unincorporated county. In addition, we will continue to notify and educate the stakeholder community on the progression of the wildlife corridor regulations across the county.