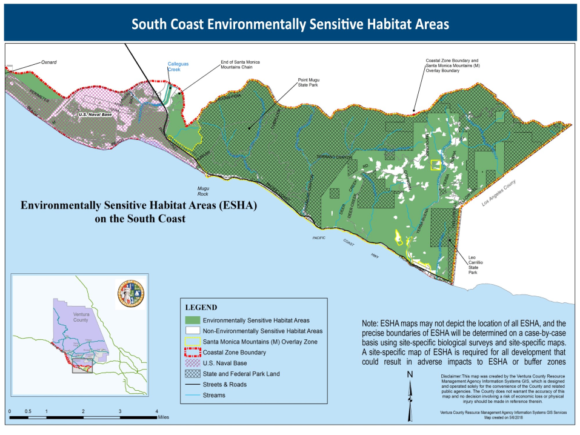 The County of Ventura is moving forward with a plan to significantly alter the regulations which limit development in the Coastal Zone in order to protect plants and wildlife. The proposed changes not only affect how and where projects can be sited, but they will impact brush clearance, grading, fencing, lighting and noise.

The County is making changes to its Local Coastal Program (LCP), which governs land use and economic activities in the Coastal Zone, an area larger than Rhode Island which extends along the coast of California. It varies in width from several hundred feet to several miles depending on the location, and in Ventura County it covers the entirety of the Santa Monica Mountains.

Specifically, the County is changing the rules which regulate development in Environmentally Sensitive Habitat Areas (ESHA). ESHA is anywhere where plant or animal habitat is determined especially valuable due to its ecological importance.

In the Coastal Zone, the Coastal Commission identifies ESHA areas using the criteria established in the California Coastal Act. Examples of ESHA in the Coastal Zone include coastal bluffs, native grasslands, coastal dune habitats, and animal nesting sites. Chaparral and Coastal Sage Scrub are also included in the ESHA list and make up the vast majority of the ESHA area in the Coastal Zone.  No new development can occur in an ESHA without a discretionary permit.

The County of Ventura says that the changes to the ESHA regulations are driven by a need to update the LCP in light of decisions made by the Coastal Commission and courts since its adoption.  The LCP was adopted in 1987 and hasn’t been updated since.

The Planning Division claims that the current ESHA regulations in the LCP are outdated and do not reflect direction on ESHA preservation provided by the Coastal Commission since the 80s. The LCP is also vague on standards for how to comply with the ESHA requirements, leading to confusion and uncertainty both among county staff as well as permit applicants about what is required.

One problem is existing ESHA maps are outdated and don’t reflect changes to the Santa Monica Mountains area made by the Coastal Commission. The changes to the LCP update these maps in order to provide better guidance to staff and property owners. The changes also add guidance for permit applicants on how to prepare and use site-specific maps for the permitting process, guidance that the current LCP lacks.

The new regulations also include a requirement for vegetated buffer zones between development and ESHA zones. The standard width of a buffer zone is 100 ft, with wider buffer zones for other areas such as streams or monarch butterfly aggregation sites.

Properties in the Santa Monica Mountains are relatively isolated, difficult to access in wildfire conditions and surrounded by highly flammable chaparral and sage scrub which can’t be cleared on a regular basis. These conditions make homes and businesses in the Santa Monica Mountains especially vulnerable to wildfire risk. They should be given the ability to clear brush 200 feet around their buildings in order to give them more defensible space, both for residents and firefighters.

On the positive side, the proposed LCP changes include language for “reasonable economic use” of a lot when it cannot be developed without impacting ESHA. This would include lots in existing communities or lots that are completely covered by ESHA. The Coastal Act includes language allowing for reasonable economic use in order to avoid a government taking of private property.

The maximum allowable building size is limited to 10,000 square feet or 25% of the lot size, whichever is less. The County will also be requiring a “least damaging alternatives analysis” if a project will impact ESHA. This analysis will be used to determine whether a different project design would reduce environmental impacts.

The LCP changes also include some attempts to provide incentives to landowners to preserve ESHA. A property owner can expand the maximum allowable building size to 15,000 square feet if they retire the development rights on a 3 acre or greater parcel.

Lots can also be reduced below the minimum lot size if land is set aside for permanent conservation. A property owner can request a lot line adjustment to create a smaller lot, but must set aside a minim of 40 acres to be permanently conserved for ESHA habitat.

All impacts to ESHA however, even from fuel modification zones around buildings, must be mitigated by using land to preserve, restore, enhance or establish new ESHA zones. Mitigation must occur at a 2:1 ratio for coastal sage scrub and chaparral, so for every 1,000 square feet of development, 2,000 square feet of ESHA must be restored or preserved. Wetlands have to be mitigated at a 4:1 ratio and all other ESHA types at a 3:1 ratio.

Such mitigation can rapidly become expensive, since landowners must use on-site land to restore or establish new ESHA. If enough on-site land is not available, off-site land must be acquired to use for mitigation. The fact that nearly the entire Santa Monica Mountains area is covered by ESHA combined with the mitigation ratios, property owners will have to be constantly scrambling to find enough land for mitigation for even the smallest projects.

While clarification on some of the rules surrounding development in the Coastal Zone is welcome, the changes to the LCP highlight the extreme challenges facing property owners in completing any projects in the area under Coastal Commission jurisdiction. The new maps also are a stark visualization of how concepts like ESHA can be used to make vast swaths of land unusable or prohibitively expensive to develop. The amount of brush clearance landowners are allowed to do is also dangerously inadequate.

The County will be continuing to solicit stakeholder feedback in advance of the LCP changes being brought to the Planning Commission on August 18. The Board of Supervisors is tentatively scheduled to review the changes later this year. Property owners in the Coastal Zone and the Santa Monica Mountains will need to ensure that their voices are heard so that the final regulations take their needs into account.