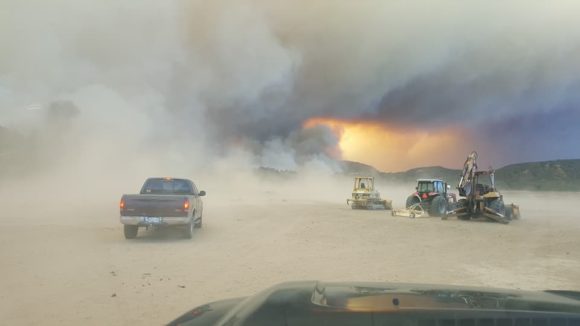 Clif Simonson was supposed to go to a budget meeting Tuesday. Then the Thomas Fire swept through Ventura County. The manager of the 1,000 acre Bentley Ranch adjacent to the southern part of the Ojai Valley immediately cancelled his plans and headed out in his truck.

He had been here for the ’85 Wheeler Fire which swept through the county and he knew the damage an out of control fire could cause.  In addition, the primary power transmission lines to Ojai ran through the ranch, and a major fire could take them out.

By the time he and ranch owner Ted Bentley had gotten into his truck and rolled into the back pasture, the fire had already come into Lion Canyon. It had wrapped over to the south and was eating into the pasture south of them.

Simonson knew from his experience in the ’85 fire that if they didn’t act quickly, the fire would move into the brush along Creek Road, Country Club Drive and Persimmon Hill. Firefighters were busy protecting structures and hadn’t yet realized the threat that the fire posed to the Ojai Valley. He needed to get the fire turned around to buy time for Cal Fire to react. Huddling with the Bentley ranch foreman, who had been up all night preparing for the fire’s arrival, they decided to use the ranch’s bulldozer to cut a fire line along the perimeter of the grass fire.

By this time, Cal Fire firefighters from Monterey had arrived to help with the effort, along with extra heavy equipment and bulldozers. Having experience with the topography of the area, Simonson took the firefighters to the western point of the ranch above Creek Road, showing them where to cut fire lines to Camp Comfort and on the northern boundary of the ranch adjacent to Soule Park. Using the incredible teamwork of the Cal Fire crews, he guided successive teams of fresh firefighters on local topography and conditions. 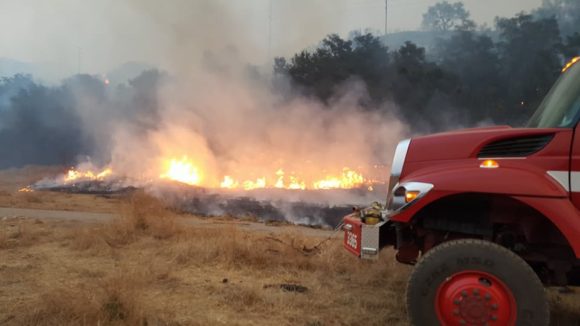 The result of the combined work of Simonson, the Bentley Ranch team and Cal Fire was the successful diversion of the fire away from San Antonio Creek and the city of Ojai and the time to build secondary defenses. The fire was then forced to burn around the ranch, back upwind and slowing its advance toward the Ojai Valley Inn and the surrounding houses.

Simonson credited the good work they were able to do protecting the valley below to the solid teamwork between the ranch and Cal Fire. In addition, he emphasized the importance of proper brush clearance and land management for the lack of damage to structures and utilities on the ranch. Because of the Bentley Ranch’s fastidious approach to fire clearance, the damage from such a large fire to the 1,000 acre ranch was surprisingly small.